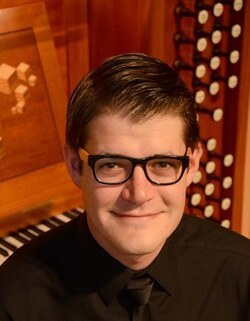 Hentus van Rooyen is Assistant Professor of Music, Sacred Music Coordinator and College Organist at Bethany College in Lindsborg, KS. Van Rooyen studied organ performance under the tutelage of Jesse Eschbach, and baroque repertoire studies with Paul Leenhouts. He holds a B.Mus. from the University of Pretoria and a Master of Music from the University of North Texas. His quest for international studies was initiated after winning the Stephanus Zondagh Overseas Music Study Scholarship at the UNISA Overseas Music Scholarship Competition in 2011 while studying with Wim Viljoen. During his study with Viljoen, van Rooyen also completed the Teacher’s and Performer’s Licentiates through University of South Africa.  In 2012, he was awarded the Scholarship for Overseas Study from the Southern-African Church Organists Association (SAKOV), and received a generous scholarship from the Oppenheimer Memorial Trust, which enabled him to begin his studies at the University of North Texas in September of that year.
In 2013 he was awarded second prize at the William C. (Bill) Hall Organ Competition in San Antonio, TX, and n 2014 he won first prize at the same competition. At the UNT College of Music, he has been named ‘Outstanding Graduate Student in Organ Performance’ in 2014 and 2017. As the teaching fellow for organ, van Rooyen taught all secondary organ students at UNT, and was nominated for the ‘Outstanding Teaching Fellow Award’ in 2018. He was also the accompanist and continuo organist for the early music vocal ensemble, the UNT Collegium Singers, and played continuo in the UNT Baroque Orchestra. He served as the Associate Organist at Christ the King Catholic Church, Dallas.