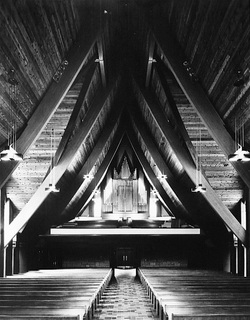 The website of the organ building firm Randall Dyer & Associates, Inc. tells an interesting brief history of the Moeller Artiste organ, an example of which is found at First Lutheran Church.

The Artiste was the Moeller Company's answer to an organ at lower cost.
These were pre-designed instruments which, for the most part, were made
as stock model cabinet organs.  Slight modification was available at extra
cost, but the tonal specificatons as well as the scaling and voicing were very
similar from organ to organ.  They were available in various sizes from about
3 ranks to around 14.  Later they were referred to as 'Series 70' and 'Series
80' organs, so named for the decade in which they were built.

The organ was revoiced by Dan Abrahamson of the Reuter Organ Company in the 1990s.  A Cymbelstern has also been added.